If you are a member of the press and would like additional information on Senate Bill S1798 and the EZ-ID program, please contact Gary Richard at gary@ez-id.org.

For original article published on October 16, 2015, please see: New England College of Optometry Study Supports EZ-ID’s Effectiveness Former and Current NECO Presidents Dr. Lewis and President Scott partner to study effectiveness of license plate design utilizing symbols Selected as one of the nine most newsworthy stories of the year by the American Academy …

Channel 5 News plans to air a segment tonight (Wed, June 6) at 11:00 on EZ-ID/Molly's Bill. They intend to air it again tomorrow on the 5:00 and 6:00 news. They taped this on May 15th, but they wanted to time it either around legislation activity, or for the June 27th anniversary of Molly's abduction. Now that the Bill has been voted out favorably, they want to air it right away. June 27th is our new target, with your help we can do it! THANK YOU ALL!!! Gary Richard

On May 29th, one day prior to the Missing Children's Day event, the Joint Transportation Committee will be meeting. This scheduled hearing provides an ideal opportunity to move Molly's Bill out of Committee and one step closer to implementation. We have met on numerous occasions with members of the Committee and other legislators to answer any remaining questions or concerns. The support is overwhelming. I respectfully request you to contact the Chairmen of the Committee to request Molly's Bill (S-1798), be reported/voted out at the May 29th meeting and allow Missing Children's Day 2012, to be both a day of remembering and celebration. What a tribute and legacy to those individuals and families who have suffered the unthinkable tragedy of losing a child. Chairman William Straus 617 722-2400 William.Straus@mahouse.gov Chairman Thomas McGee 617 722-1350 Thomas.McGee@masenate.gov Thank you!

11/28/2011: Letter of support for EZ-ID from the Massachusetts Fraternal Order of Police State Lodge sent to Senator McGee & Rep Straus. 11/22/2011: Support letter to the Transportation Committee from Steven A. Mazzie, President of the Massachusetts Major City Chiefs. See also the Mass Chief A. Wayne Sampson Executive Director's letter to the Committee on Transportation in support of EZ-ID. In Unity There Is Strength October 27, 2011 (www.masschiefs.org). 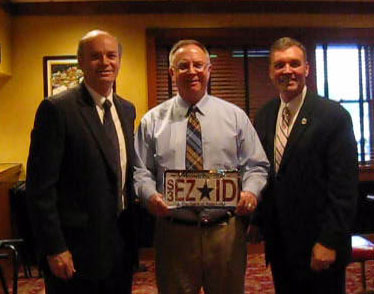 11/11/11 - What a GREAT day! The full Board of the Mass Police Chiefs voted unanamously to get behind EZ-ID! Board of Mass Chiefs President Mark Leahy surrounded by Gary Richard (left) and Jay Gardiner, Former Director of the Molly Bish Center. Endorsement letter from the Pioneer Institute! (PDF) Molly's Bill proposes new car plates

Watch news clip from the Foxnews Boston affiliate station here. URGENT ACTION IS REQUIRED!!! PLEASE ACT NOW ... News update - "Molly's Bill" to be heard on Wednesday, October 19, 2011 by the Massachusetts Transportation Committee. Click on the News Tab for additional information. October 14, 2011 - "Molly's Bill" S1798, also known as "EZ-ID" to be heard on Wednesday, October 19th. Read the letter we sent to the members of the Massachusetts Transportation Committee here (Adobe PDF). See the referenced graphics page here (Adobe PDF). August, 2011 - left to right, Jay Gardiner, the Former Director of the Molly Bish Center at Anna Maria College, Senator Brewer and Gary Richard. EZ-ID presented Senator Brewer with a thank you plate for his help on behalf of EZ-ID. Thank you all for your support! 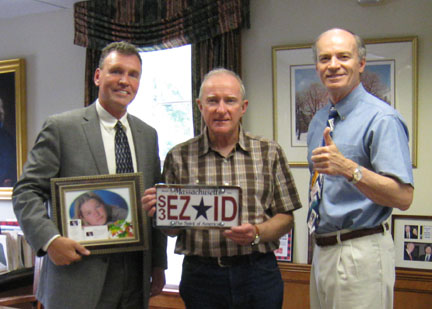 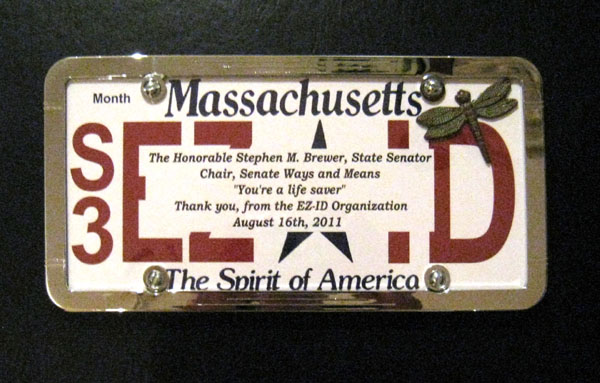 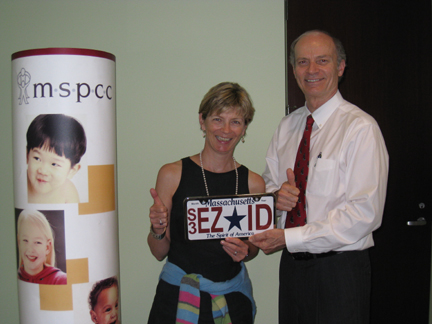 7/20/2011 - EZ-ID gets the seal of approval of Lostnmissing, Inc! http://www.lostnmissing.com/ "When a loved one becomes missing, families are extremely distraught. Working along with their law enforcement we will guide families to what needs done to help locate their missing family member. This includes media, marketing, designing missing posters and banners, and assisting the family with needed events as well as contracting for search and rescue, if advised by their local police agency. We are always available to the family and work with professionalism and compassion." June 28, 2011 - Memories of Molly - 25-YEAR TIME CAPSULE FOR MOLLY BISH - in this article Gary Richard, "promoting an "EZ-ID" license plate law, asked those at the vigil to contact their legislators and demand action on legislation that has languished in the Transportation Committee for the past seven years." 6/14/2011 - "Salem Now" with Leo Jodoin. A great interview about EZ-ID with Gary Richard, Bruce Tarr and Linda Usher. Thanks again Leo for getting the word out about EZ-ID. It will save lives if it passes but we need people to get involved. 5/25/2011 - TV Appearance – Gary Richard will be interviewed live on "Salem Now" cable TV show with Leo Jodoin 7:00 p.m., June 14th. Guests will include Senate Minority Leader Bruce Tarr, Representative John Keenan, Former Gloucester Chief of Police Mike McLeod, and parent Linda Usher whose son and friends escaped an attempted abduction. Viewers can call into the station during the program on (978) 740-5599. 3/22/2010 - Showcase Salem TV Program with Peter Alachi (substitute host Gary Richard.) Gary discusses EZ-ID in this great interview with Senator Bruce Tarr, 7th District Representative John Keenan, and Linda Usher.